CSS Dev Conf was the best conference I have ever attended. Of course, I haven’t been to many front-end developer conferences, but of all the conferences, venues and speakers that I have experienced, this one had all the right combinations. I still get giddy just remembering it.

TLDR? I gave my talk on CSS animations. Everyone loved it. And then the ocean tried (unsuccessfully) to drown me. I want to go again!

The conference was held at a hotel on Waikiki Beach in Honolulu, Hawaii. It was my first time ever visiting a tropical island, and I was filled with wonder and joy to explore a city where everything was written in both Japanese and English.

Everything in Honolulu was terribly posh, from the hotel to the eateries even down to the shopping. When I needed to buy a swimming bottom (having left mine at home on the drying rack), I had to struggle to find one under $40. Fashionable retailers like Gucci and Chanel lined the streets and were often air conditioned to the max to allow the sales clerks to wear the heavier, winter style clothing on display.

On my first night I grabbed sushi at Doraku Sushi with Kristofer Layon and James Williamson.

I didn’t have to eat out often because the conference fed us generous lunch buffets of Hawaiian favorites while nibbles and drinks were served in the evening. But on my last day, I grabbed Korean barbecue with Jina and her brother, Ben Callahan, Scott Kellum and Simon Madine. Scott turned out to be a crazy awesome Sass-er like myself. He gave me a lead on a good animation plugin for Compass, which I will be sure to use.

My talk on CSS Animations

It went great. You can find my slides here. I was up against some other very attractive talks, but people I respect like Estelle Weyl and Tab Atkins still came to my talk. Tab even published a working example of steps() in action during my talk to try to help explain its confusing behavior. I still don’t entirely understand why steps behave the way they do. I think it’s one of those things that makes sense to its creators but not the layman. He was very interested in rectifying the issue, which was refreshing. It would have been easy to brush me off as “just that one person who doesn’t understand the beauty of this code.” But Tab genuinely wanted to make this clearer for people like me.

Afterward, when I joined “the big kids” at a lunch table and pressed them for feedback on my talk and its deliver, they had none to give. I did a good job.

The conference organizers had asked Kyle and I if we’d be interested in doing some sort of arty/cartoony event at the conference. I suggested a “drink and draw,” an event that is exactly what it sounds like. But it quickly started to grow in concept. When he arrived in Honolulu, one of the first things I asked my co-host when he arrived at the hotel the night before was, “What are the rules going to be?” (And then I put a lei on him, and we grabbed beers from an ABC Store with Pam Selle and Simon Madine.)

We ended up drafting artists from the afterparty crowd into Team Squirrel and Team Crow. Both teams had a few minutes to draw the announced topic, like, “What is Tab Atkins not allowed to talk about?” The audience provided Judges. The winning team got mini comics by yours truly. Team Crow won, of course, but it was only by a single vote! Tough competition! We took victory photos in the photo booth.

Paul Irish is one of those developers I found out about because of Rebecca Murphey. For years I’d been trailing him like a lone, injured wolf trails a herd of hardy bison in a cold winter, or like a lurker silently follows a heated political debate on a message board. So I was caught completely by surprise when I heard him call out to me by my name from behind on my way to the ladies room. (Worst timing ever, Paul.)

That was the only interaction we had. And he gave a talk about “jank” and JS timing that I want to watch every morning of every day until it’s burned into my mind.

I did get to meet his fiancee at lunch, and then I accidentally crashed their engagement party (no one told me it was an engagement party! We were supposedly meeting up with another group of people–who turned out to be at the engagement party!). Verdict: That could have gone better. I demand a do-over in the future, with no engagement parties or bathrooms.

Then I ended up going out to dinner with Tab Atkins, Jenn Lukas, Chris Coyier, and Phillip Walton. Jenn got us a decent seat with the waitstaff by virtue of her gorgeous ink. Chris Coyier, who always seemed so straight-laced on CSS Tricks turned out to be a double for Kevin Smith, providing excellent laughs and commentary throughout. Phillip Walton turned out to be that Phil who wrote my favorite article on CSS Architecture.

Sadly, the bay everyone had gone snorkeling in prior to my arrival was down for repairs, but Ben Callahan convinced me to take a group surfing lesson with him, Jina, and her brother the morning after the conference. We had an extremely laid back instructor. The most upset he got was when he shouted at us that we all just needed to “calm down, man.” There were five of us, and we paddled after him into the waves. The trick is to approach the waves head on. If you try to paddle your board parallel to them, they will wash you into the water.

At first I was having a great time, splishing and splashing and flying off the backs of waves. But then I got knocked into the water, flailed about, and drank a lot of sea water in the process. I felt very sick when I got back on my board and my energy started draining faster than Macbook Pro with 100 Chrome tabs open.

We were supposed to hold onto a line, but it broke! We drifted into the white water. Ben made his way back to the safety of the channel while Jina took her lesson, but my arms were nearing exhaustion, and I was unable to keep up. I was almost parallel to a big, white wave coming my way. I did not relish the idea of drinking more sea water and further skinning my knees, so I turned my board as quickly as I could to be perpendicular to the wave and ended up facing the beach with a gigantic wave at my feet. I felt the wave try to dislodge me from the board, and I gripped it with white knuckles. “Fuck you, wave,” I muttered before it shot me across the ocean like a bullet.

I was going so fast I was too stunned to stand up! By the time the ride was over, I was closer to the beach than my group. With my wet noodle arms, I began to weakly paddle my way to shore, taking breaks to rest up. The teacher wailed at me not to abandon the group without telling him again. (He sounded very un-calm.) I waved him off with a noodle.

I nearly collided with a tourist boat. Several dozen people watching as I flailed about in the water trying to get back onto my board. It was then that I realized my greatest fear: I was The Stupid Tourist. I consoled myself that I would never see any of them again.

I have never been so happy to see wet sand before… and never more determined to give surfing another shot!

On the last day, Kyle, Simon, and I were catching late flights, so we took a trip together to the Waikiki Aquarium. Poor Simon had to put up with Kyle and my bickering over jellyfish and other aquatic things.

I took lots of photos of my trip and the aquarium if you want to see them!

Simon’s from Scotland, traveling out of Germany, and his wife is a museologist (how cool is that? I hope I get to meet her one day!). He gave a very interesting talk about testing CSS which I missed, sadly.

Simon had to catch his plane, but Kyle and I soldiered onward to the Honolulu Zoo in search of their three species of Birds of Paradise, a group of birds I’ve only seen in National Geographic specials and have always wanted to see in person. We only found two, but then we ran into a group of super chill Nene geese! 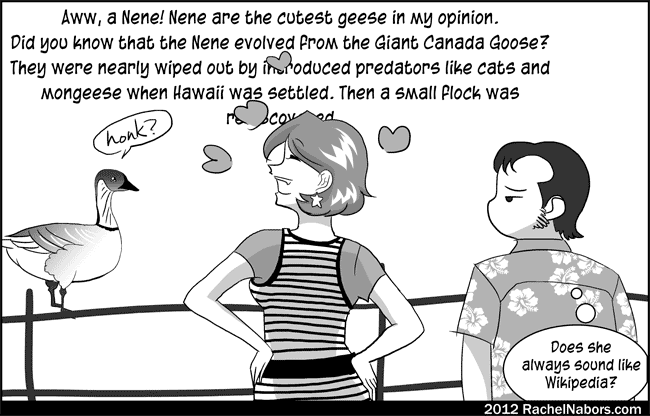 Then I broke out in hives. I can only assume I’m allergic to tropical islands and can never stay on one for an extended period.

The organizers Christopher and Ari put together a great conference and were really sweet people. I got to meet so many of the people I look up to and respect in person and got to meet many more I’d never have found otherwise. Tab Atkins went from “barely on my radar” to “tag this guy with a radio collar and release him back into the wild.” I feel like I found a long lost brother in Kyle Weems. I definitely want to see more of Pam Selle and Simon Madine at future conferences.

There were many women of all types and colors, attendees and speakers (6 out of 20!). At no time did I feel like I was interrupting a boys’ club, and everyone was exceedingly respectful of one another. Japanese and local Hawaiian attendees also brought diversity. On the East Coast, I am only exposed to European web developers and designers. I had a fascinating discussion with the team from Rakuten about the progress of Japanese web design. I will save that discourse for a post about the state of the Japanese web, though! I did feel very sorry that I had not practiced my Japanese more before coming.

It was the crémé de la crémé of CSS geeks, and I’m honored to have been among those speaking. Most front-end development conferences revolve around JavaScript. It was a relief to attend a conference where my favorite thing–CSS–took center stage. I can’t wait for the next one!