In my peregrinations across Craigslist, I often come across ads like this:

Awesome Corp. is looking for a web designer with the following skills: standards compliant code, ColdFusion, CSS, AJAX, JQuery, ASP, PHP, WordPress, Drupal, MySQL, Oracle, Flash, Actionscripting, Photoshop, Fireworks, Illustrator, Dreamweaver… …and so forth. They might even throw in InDesign or Quark Xpress, just for kicks! 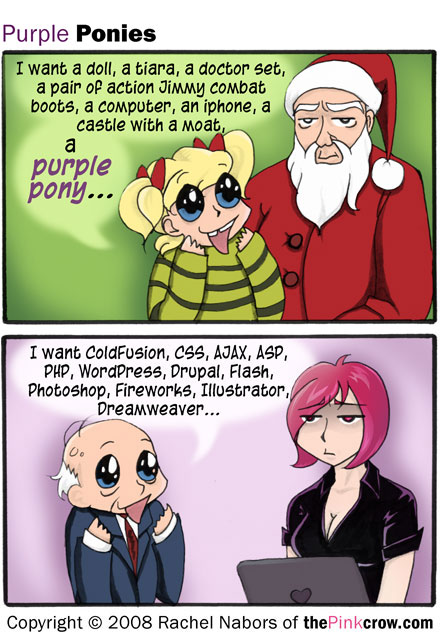 The truth is, unless the advertiser is a consultancy firm or web dev shop, they probably don’t need someone with so many skills. In fact, a competent person with such a broad skill set is hard to find because skills take time to learn thoroughly. Remember that experienced, veteran web monkeys cost more to employ than their juniors. It’s supply and demand at work; they can charge more because everyone wants a purple pony.

What will happen is that Awesome Corp will get applicants, some with resumes that list every one of those skills. Of those resumes, the veteran web developers and designers will be asking for more money than those who’ve been in the field for less time. The company will probably be more interested in hiring the cheaper applicants, because of course anyone experienced with all those skills isn’t going to be cheap! But Awesome Corp. may have actually ended up picking the more expensive option after all.

Jack of all trades, master of none.

Beware. People exaggerate on their resumes. It’s easy for anyone to put down all the acronyms and buzzwords needed to bring in an interview or a new client. But can they deliver? If a company chooses to hire someone with a smattering of training in many different fields, they aren’t getting expertise where it matters, solid coding, design, etc. This means projects take longer and cost more. That’s what happens when you try to cut corners! (Naughty company, no cookie!)mot

People don’t just ask for purple ponies in web design; they ask for them in real estate, too! Many a time has my Realtor mother regaled me with stories of people in search of their perfect home on the mountain. They want a view, a stream or pond, near a road, but far from people, a fixer-upper cabin, a moat, a purple pony. Truth is, it is very rare to find all that in the mountains, and it is never cheap.

Some of the clients’ specs are even downright contradictory (like Fireworks and Photoshop)! You get views on hilltops, but water and springs don’t crop up in high places. Without owning an entire valley, finding a view of the mountains and a creek in your backyard is difficult to say the least. But, some plots do exist, with the view, the cabin, the creek, the forest, the barn, etc. And do you know what? They cost a fortune because everyone wants the same thing! Purple ponies are by their nature very expensive. And even ones you think would be cheap, the “fixer uppers,” aren’t because everyone wants to fix them up. In much the same way, even a “fixer upper” rookie developer is going to cost more than they initially appear.

What do you need? What don't you need?

The best way for a company to avoid getting into this situation is to know what they need. A few notes of interest:

So, do you have any tips of your own that you would like to pass on? Please share!